The distance from Volgograd to Rostov-On-Don is about 550km on good roads, partly on M4 which is a well built 2 lane highway. However we decided to have a stop over in a hotel about 170 km before Rostov so we don’t have to drive so much too much that day.

Nice hotel, nice food, good rest. The next day we headed to Rostov-on-Don or Росто́в-на-Дону́ or Rostow-na-Donu. Smaller than Moscow or St.Petersburg, still 1.1 million, but cozy, relaxed right at the river Don. We had booked an Airbnb in the center of the city before we arrived there, walking distance to the Fan Fest and the Rostov arena as we were going to watch the round of last 16 Match Japan vs Belgium here.

Firstly in Rostov-On-Don we had to get rid of our extra tickets for the game, went to Decathlon with the hope of finally getting new gas for our cooking stove (still no success) and checked out the city for a bit whilst feeling to be on a cooking stove ourselves – still 38 degrees during the day…

Nothing more, dinner at night and good rest again. Walking distance in Russia means 8-12km a day. That needs good rest for sure. Sightseeing and Russia playing Spain deepened our T-shirt-tan in the burning sun and to our surprise we gonna watch Russia in the stadium in Sochi on 7th July…What a party! Happy Russians everywhere and surely we are also happy to see a match of Russia live!

Finally it was game day in the Rostov arena! Before our highlight of the day we went to the Fan Fest to watch Brazil beat Mexico. From there the shuttle bus took us conveniently direct to the brand-new stadium on closed roads and to watch what we thought will be a boring game – but yeah we were wrong! 2nd half with 5 goals and Belgium conceding the winning goal in the 95th minute… we felt sorry for the Japanese! 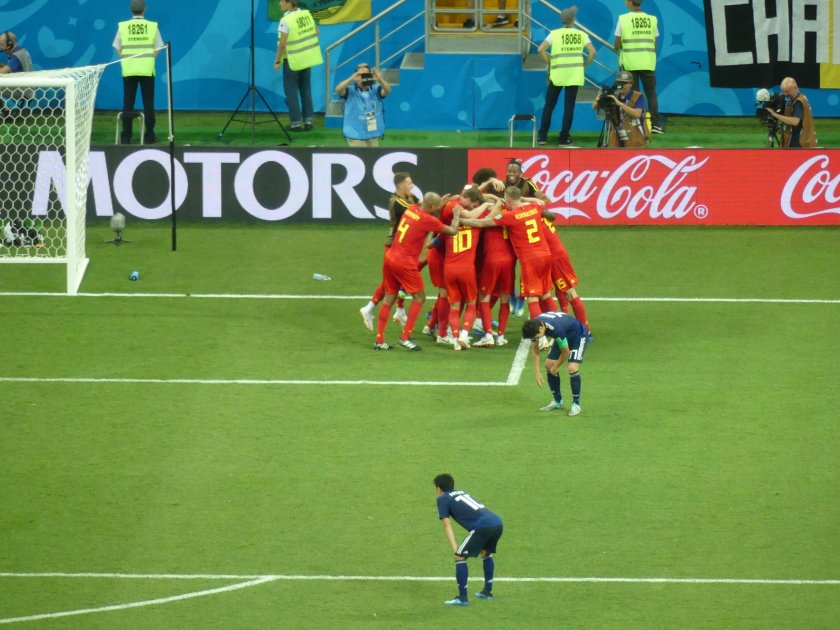 We had some traditional tasty Khachapuri (picture 1) and excellent Khinkali (picture 2) in a neat local restaurant after the match. The next day we planned to arrive at the Black Sea, we were very excited after so many kilometers over land.

2600km more or less on straight roads within Russia has been less attractive hence we were happy to drive through the mountains to the coast of the Black Sea. Windy roads and some stunning views were very much appreciated! And it’s nice to see some other bikers again even more as everyone is greeting while heavily waving in full stretch of the arm. We even got some fist bumps while overtaking! And in between the horns or thumbs up from passing cars. Cool stuff! 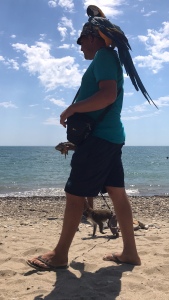 After a 2 nights stay at the coast in Lermontovo in the very nice guest house Shokolad close to the beach and a lot of tasty shashlik we drove another 5 hours on the beautiful coast line to Sochi, the host city of the 2014 Olympics and the quarter final of proud Russian’s Sbornaja. We’d love to see the next World Cup’s surprise – GO RUSSIA!

We have passed the 7000 km mark by now, check out our route to Sochi. 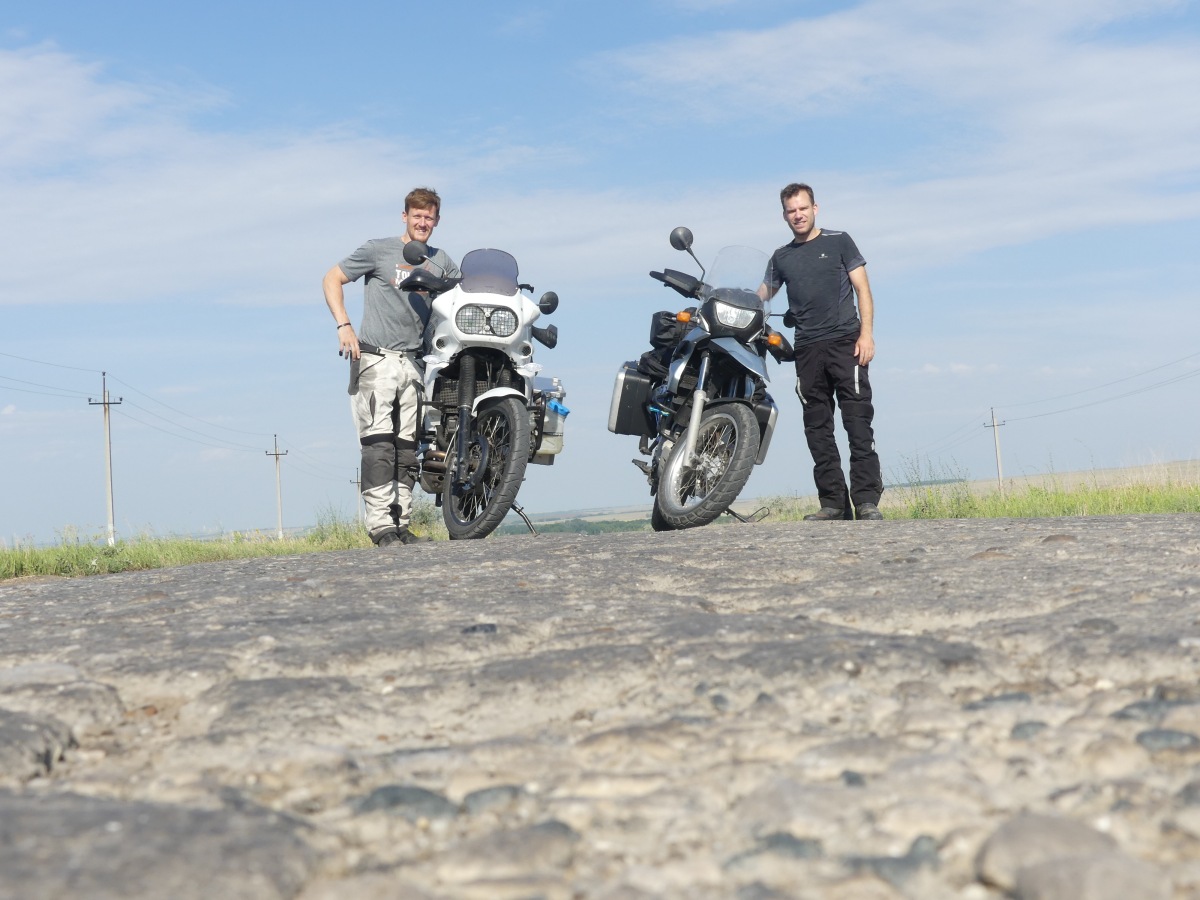 Check out the route before start reading todays post. You’ll see that we were on the road for quite a while getting to watch all the matches we have tickets for. You’ll also see that more or less for the first time we really visit places apart from the two most famous and biggest cities of Russia.

But let’s start with leaving Moscow. A great time and the longest stop on our route so far was over and our bikes also got some rest for one week. All four of us exited to hit the road again decided to start slow, get out of the city and concentrate on the big chunk of the route to Volgograd the day after. Good idea, as we experienced a very uncommon and rare phenomenon on our trip. When we rested in our beautiful Russian Motel room with the „special taste“ bedsheets, it rained 😉 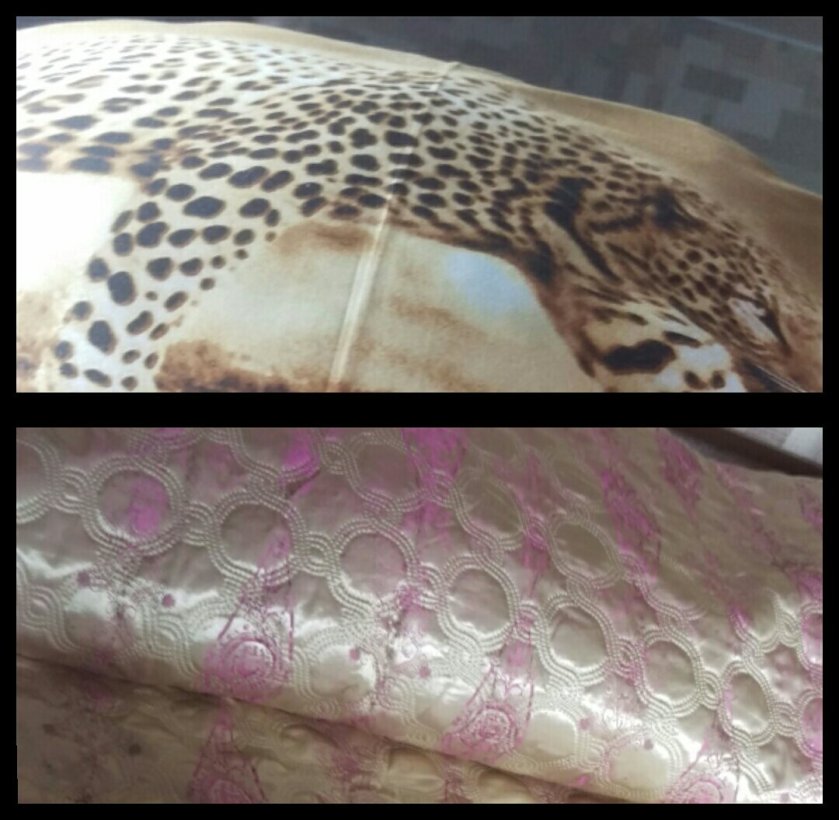 Not too hot, cloudy and dry, perfect conditions the next day for the 550 km in the direction of Volgograd. Time to drop some words about the things we deal with on the bikes during the long hours driving.

Actually there is one rule to follow: Always expect everything to happen! Parts of broken cars, burst tires, holes, bumps, dead animals, strong wind, cyclists, people walking in the middle of nowhere, cars overtaking left and right, with or without cars on the opposite lane, trucks driving 120km/h, speed cameras, and never slow down on roadworks sites, it’ll jeopardize yourself more if you do so.

On the other hand there is much to see actually. It seems as if there are certain areas or villages where one sort of goods are being sold. These things don’t seem to be originated in that particular region. Why should you sell popcorn and Russian bread in a village named Electric? Why are pickled beans, peas, peppers, carrots, pretty normal stuff being sold out of cars on a stretch of 30km and then never again? Why are in whole Russia Cafès, gas stations and little restaurants along the street, selling coffee and tea and all of a sudden there is one village with approximately 30 little booths selling tea and coffee out of the traditional Samowar? Apple juice, fur boots and vests, carpets, garden gnomes, stuffed animals, squirrels and we probably forgot something exceptional that was being sold at some points.

The Russians are a very proud folk and remember the latest history. That mirrors in war memorial statues and sculptures in dozens of places along the route. Sometimes it’s just a tank or a fighter jet, sometimes an individual piece of art. The most stunning monument of course is the Mamaev Kurgan statue in Volgograd. The woman with the sword in her hand measures 87 meters and encourages her sons to defend their homeland. It also commemorates the battle of Stalingrad (later renamed to Volgograd) and the 30.000 soldiers who lost their lifes on that hill.

Before we got to see this statue, we detoured approximately 250km eastbound to meet an old friend Daniel has a special relation to. 10 years ago Daniel and his brother travelled to this more remote region of Russia. Reason was to find out where his grandfather was born as Wolga German. A coincident brought the brothers together with Artur Kaiser, whose parents shared a similar past as Daniels grandparents. Artur not only hosted them, he also drove them around in his Lada. Far away from smartphones and internet they hadn’t have contact for ten years. We found Artur and family in good health and we couldn’t deny to stay at their place for the night. We can’t say how thankful we are for such friendliness as a matter of course. They don’t live in wealth with good office jobs and social security services, with foodora, shopping malls and Netflix. But they were as happy as we were that google translate also works offline 😉 We generally experienced that in Russia. Russians sometimes come across as a bit fierce and very serious. But once the ice is broken we had fun and help everywhere. 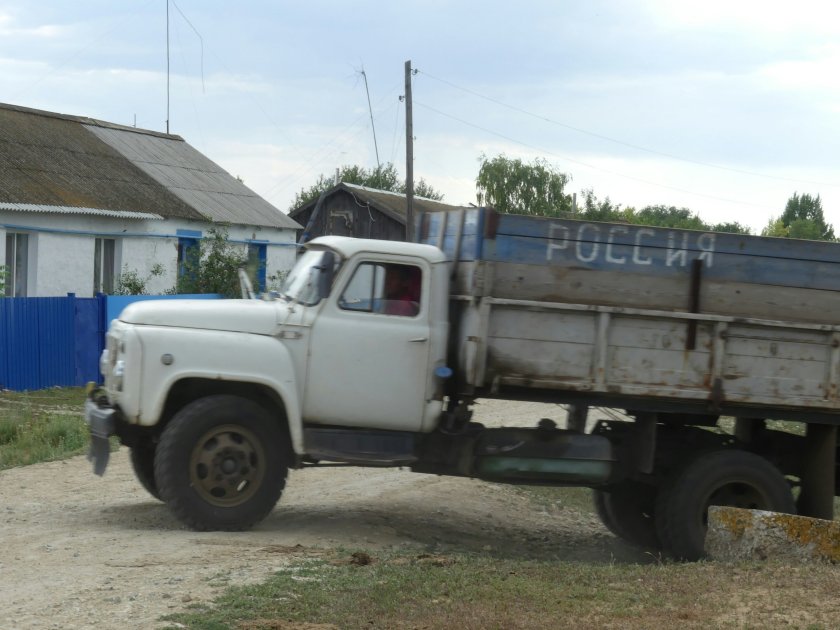 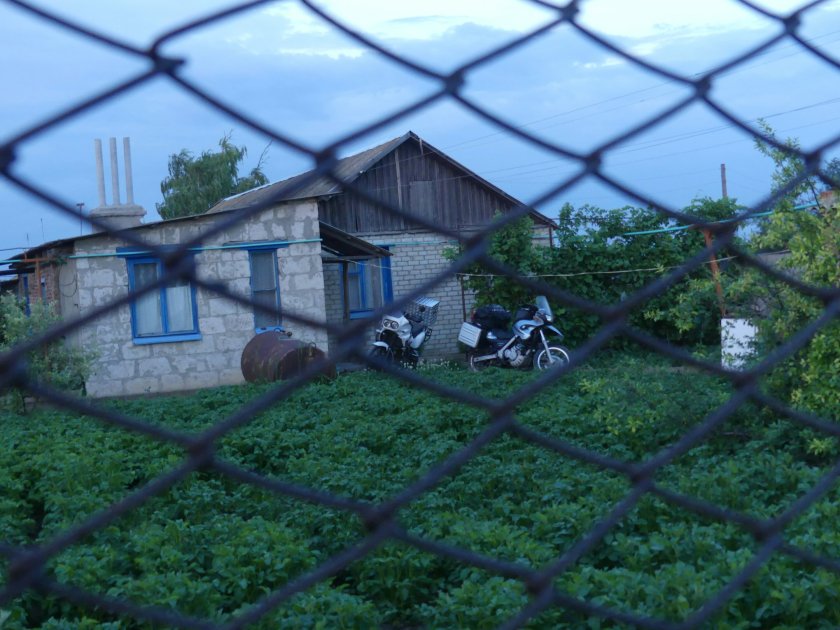 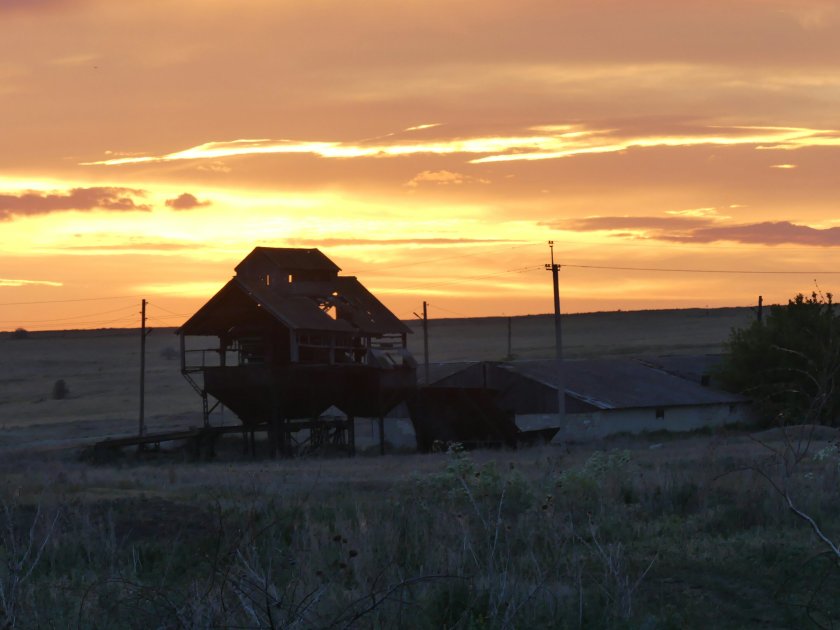 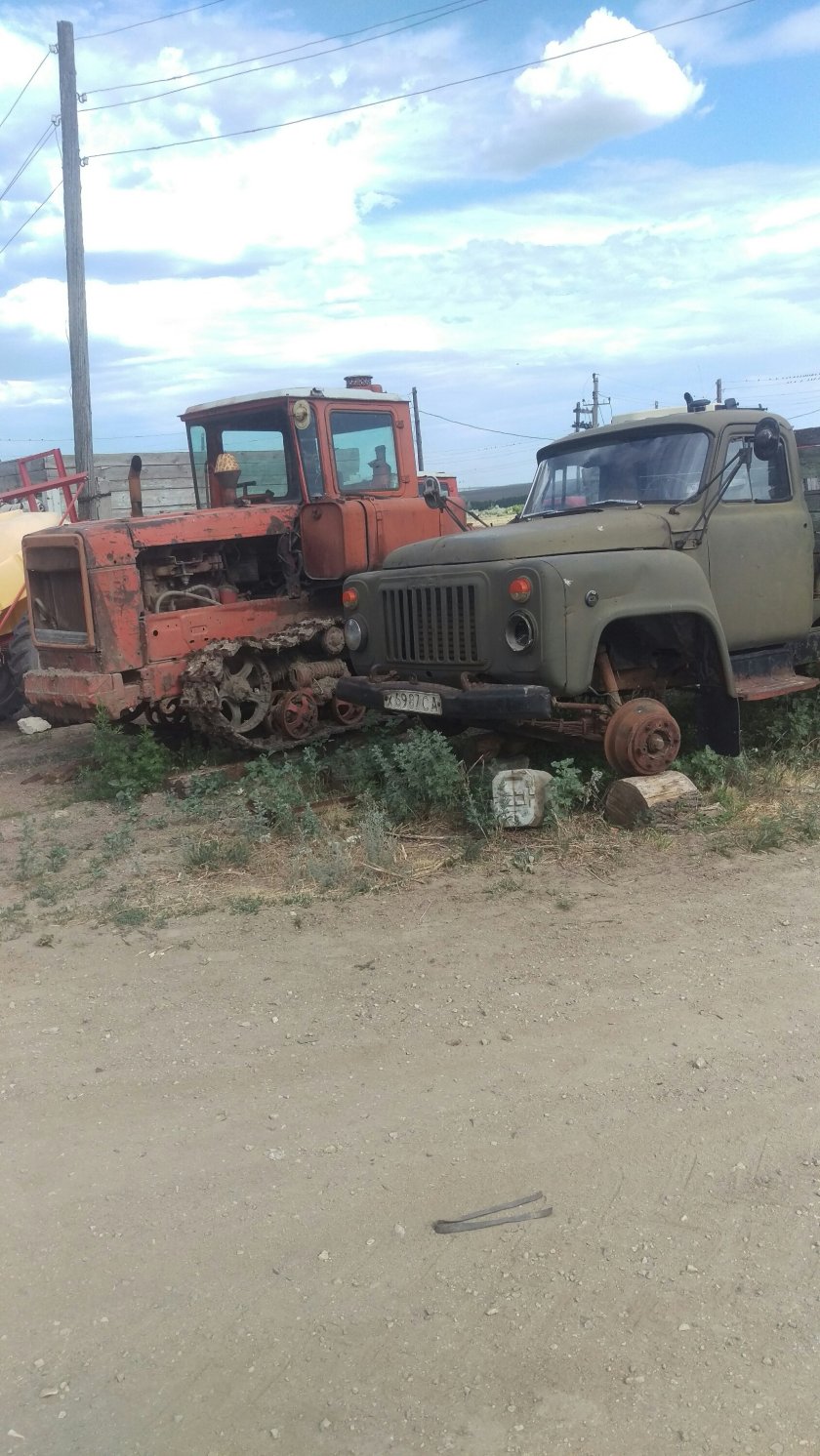 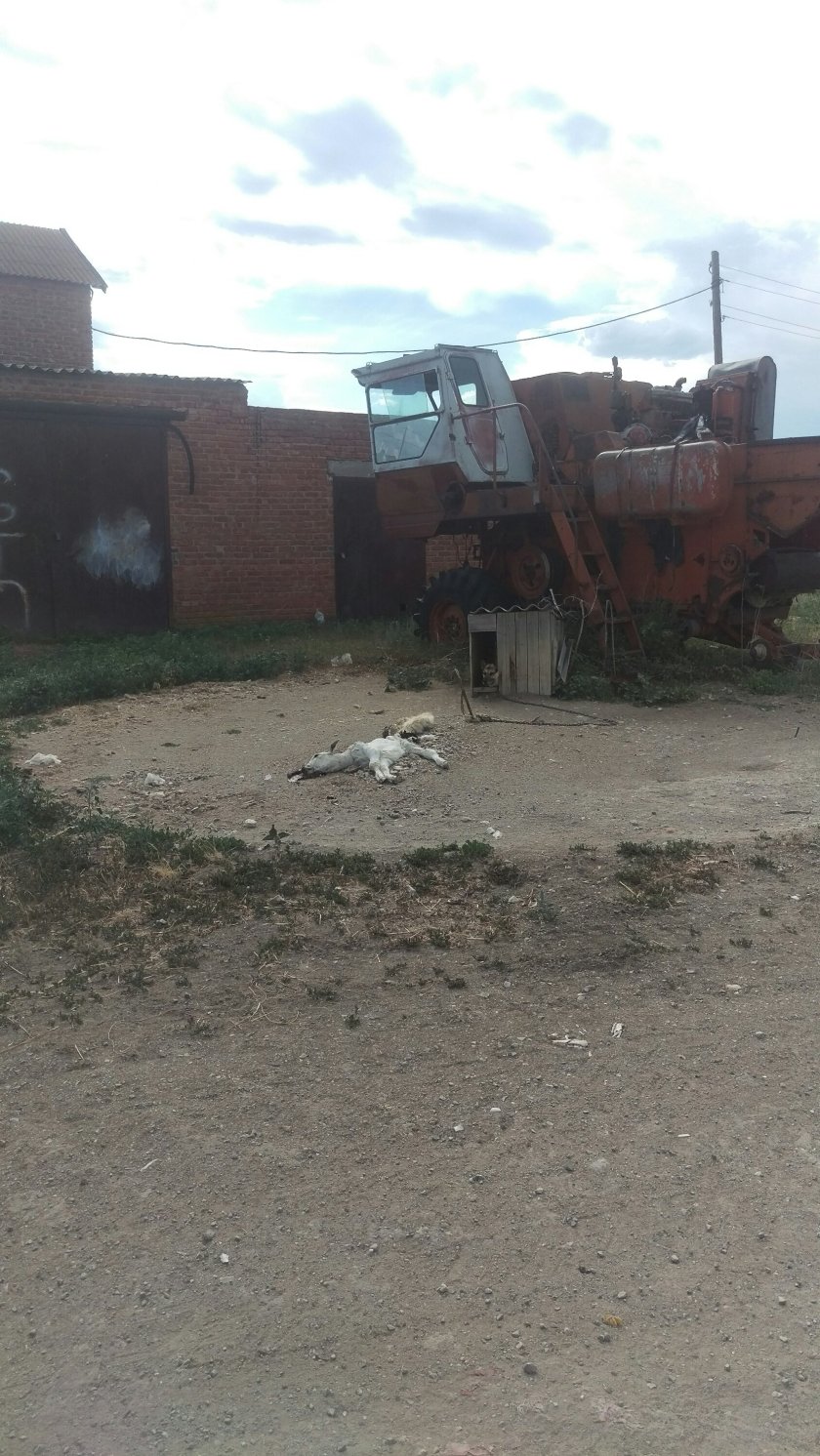 We looked forward to see Volgograd, though we just had two nights here. We liked it very much but bottom line the following things happened. It was 38 degrees on both days, what simply restricted us to do things outside between 12 and 4pm. We walked to the fan fest to find out that they show Mexico-Schweden 10 minutes before kick off. Met Andi and his squad to watch in a nearby hotel Germany get eliminated from the World Cup. 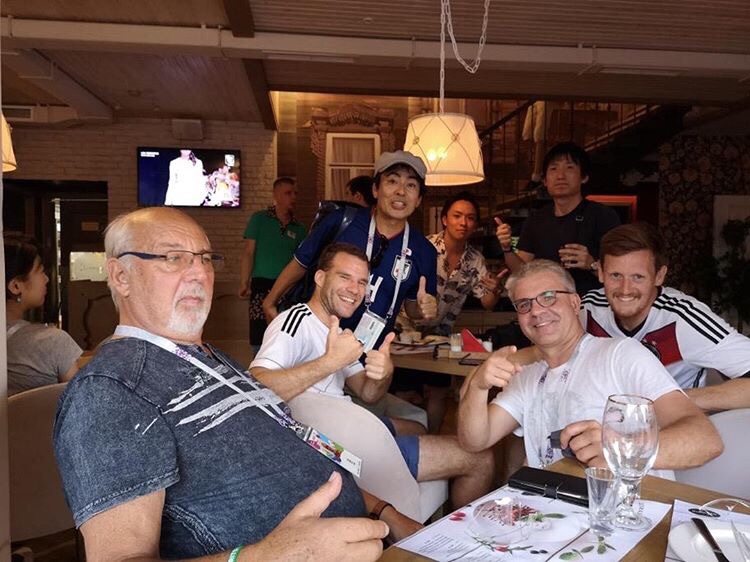 The next days match Japan vs. Poland in the new Volgograd arena was less interesting and less atmospheric than all the games we’ve seen so far. Though we had sympathies for Japan before, we wanted Columbia to draw their game against Senegal and England to win against Belgium for our round of 16 game in Rostov to be more exciting. Nothing of it happened. Now we watch two teams playing we already watched. „No-atmosphere-Japan“ against „Let’s-be-polite-and-just-score-3-goals-Belgium“. We decided not to watch England vs. Columbia in TV 😉 Last but not least the morning of departure we figured out that the battery of Jendrik’s BMW was empty. Then again everyone went way beyond to help. Russlan, the parking guard and Andrey who was just passing by helped pushing the bike, organise a starter cable and even a battery starter for us to get it started. It worked, however took 1,5 hours and destroyed our plan to escape the heat of 39 degrees at noon on the way to Rostov. We expected these temperatures in India but now we know how it’s gonna be…